You are all probably wondering what this is about, some of you might even be getting flashbacks to Yu-Gi-Oh! by the title of this post, BUT, this is way better, so hold on tight you weeb and keep on reading!

THE largest Anime community on Discord, made an Anime Card Game where you can collect Anime cards based on your favorite anime characters, do you know what this means? You will be able to collect... WAIFUS, and do you want to know the other spicy detail? You can even trade them amongst other users! 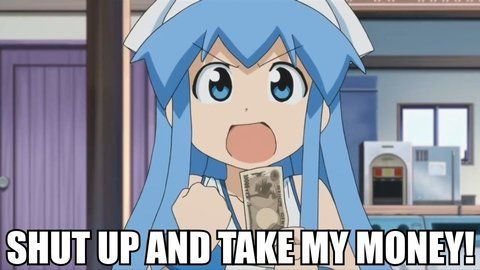 First of all, make sure to join the Anime Soul Global Discord server where most server owners are that have added the bot to their servers. You will be able to ask for support, suggest new ideas and access all the information you need regarding the bot and so on. Anyway, lets get started! If you are a server owner and you want to add the bot to your community, then follow the steps below:

🔹 You need at least 100 members in your server before the game will work.
🔹 If you have 100 members, you need to add the card game bot: Shoob
🔹 If you want your community to gain Tomi (AS currency), add the bot: AS Tomi Bot

Once you have added both bots, you can start the card spawning by typing the command, "as!activate" in the desired channel, make sure that Shoob can attach files, embeds and has permission to see the channel. If you don't own a server, keep on reading!

You can start collecting your Anime Cards at one of the Anime Soul Network servers or any other server with the bot Shoob, I will get into the details about the Network and the Network servers further down in this post, but you can head over at Anime Soul Discord. Once you are in the server, scroll down on the channel list and find the channel called #Card-Game⭐, once you enter that channel, you will see a bot, called Shoob, spawning Anime Cards like this: 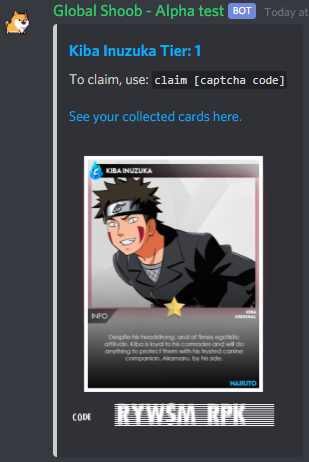 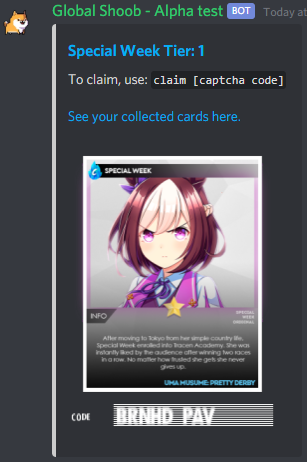 In order to claim the card, you have to enter the code, that's below the card, but you have to use a command called claim, so if I were to claim the card Yukana Yame, I'd type claim hcfoejhh, before everyone else and Shoob, the bot, will let everyone know that I claimed the card. Keep in mind that you will be able to claim cards in Anime Soul and other Anime Discord servers that are a part of the Anime Soul Network or have Shoob added to their servers.

As you can see, the cards are named based on the Anime character, but you have probably also spotted that there is something called tier, and I will explain that in a second, so take a good look at the card Kiba Inuzuka, which is a tier 1 card, the moment that card is claimed by an user, it will be stamped with an issue number. First things first, what is a tier? This means that the card belongs to the grade of tier one cards (one star cards). To make this simple, if you were to claim a card, a tier 1 card, and you are the first person to ever claim that particular card, the card would have the issue number 1, and if the card were to ever spawn again, it'd have the issue number 2 and so on. With that being said, there are six tiers in the card game, and there are rumors about a tier seven (but we'll see if that tier ever appears). Here you will be able to see a collection of cards, from all tiers:

They're fancy right? Basically, as you can see, the higher tier, the cooler and more detailed the cards become. You can see all the available cards, from all the different tiers here.

Besides being able to claim cards in the chats, you can also get your hands on them through the mini games. Inside the mini games page, cards will show up with a minute timer, you can press on enter mini game and you will be directed to a page looking like this: 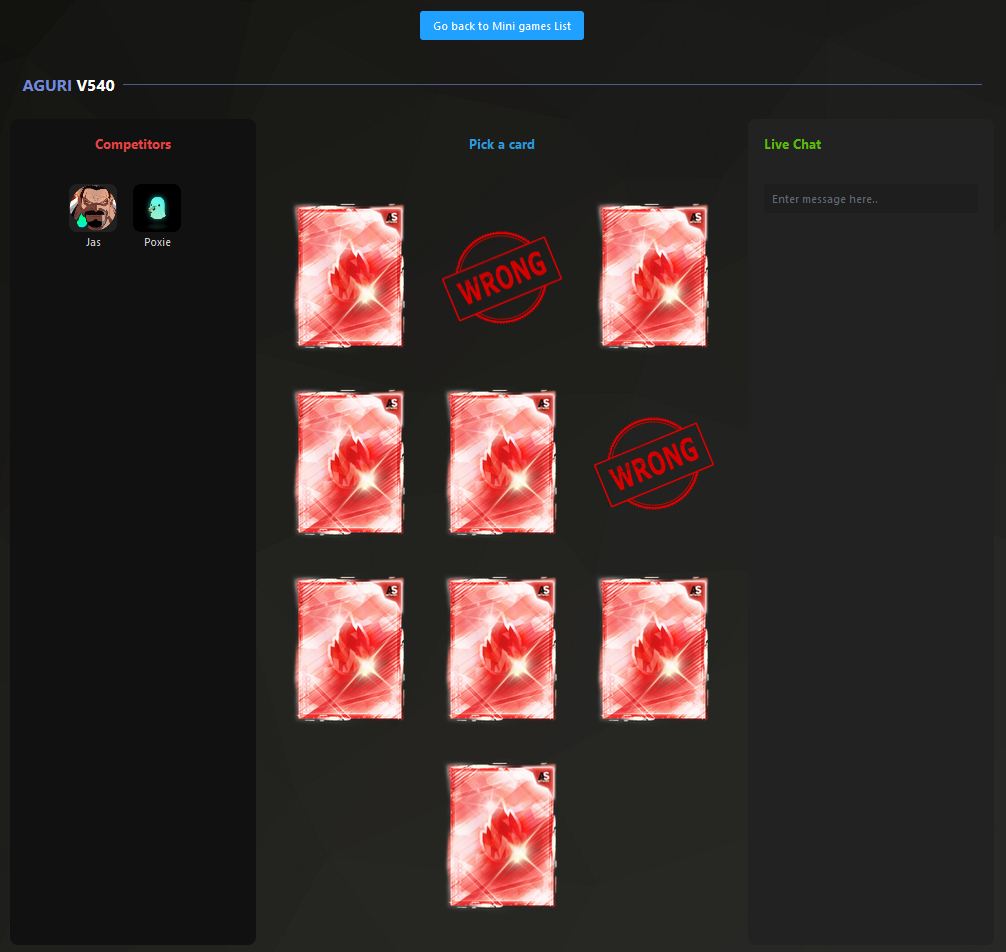 You will be able to guess one card out of ten possible options, if you guess wrong, you will be hit with a wrong sign, and something like this might happen...

but if you get lucky, you will see the card and get it. The mini games is made for those who prefer to claim anime cards without having to stress and compete with other collectors in the Discord channels.

Certain cards contain a hidden ability. This ability is either Active or Passive. Passive abilities take place once the card is in your inventory and not for sale nor for trade. For example: Netero will double your Bump Tomi once he is in your Inventory. An active ability will occur when an action is done on the card itself, for example, a card whose ability is to fuse 2 tiers higher instead of 1, will activate when 10 cards of that type is fused. Passive abilities of the same card do not stack ie: Having multiple Netero in your inventory will not give you more than double Tomi when bumping.

You can choose 10 cards of a tier and fuse them into 1 card of a higher tier. This will allow you to get your hands on higher tier cards quicker, you can head over to the fusion page: 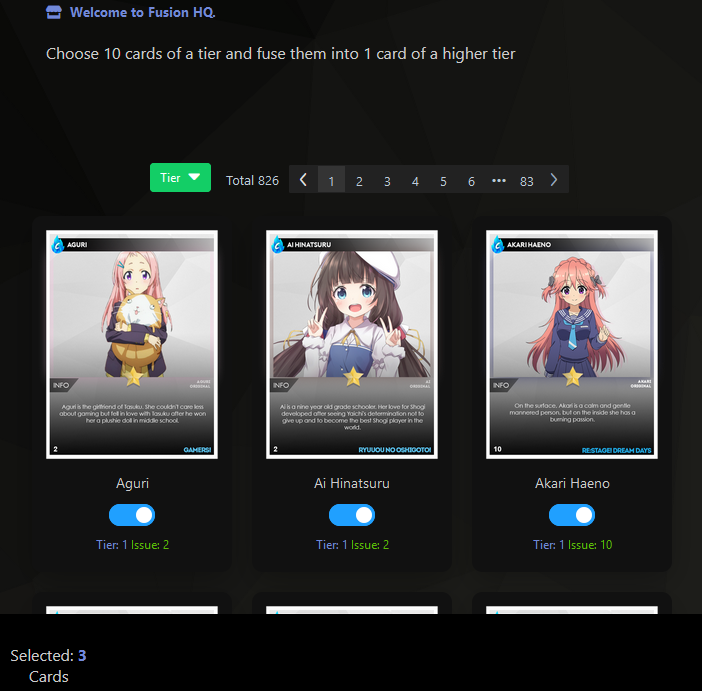 Inside the fusion page, you can pick the tier, you wish to fuse from. In the picture above, I'm showcasing tier one cards and I've selected three cards, I need to select seven more, to be able to get my hands on a random tier two card. You can use the fusion feature if you are eager to get your hands on newly released cards from the different tiers, however, since fusions are randomly generated, you'd need plenty of cards to fuse.

Anime Soul Network has a global currency, called Tomi (wealth in Japanese). You can collect Tomi in many different ways, and with Tomi you can buy cards packs that contains anime cards, profile cosmetics, discord nitro and steam games. You can spend your Tomi at the Anime Soul shop. Here is a list of all the possible ways to get Tomi, remember this might get updated:

💰 Message or voice activity, in any Anime Soul Network server.
💰 Winning in the Global Network events.
💰 Getting into the leaderboards in any Anime Soul Network server.
💰 Bumping in the Anime Soul Dashboard, one available bump per hour.
💰 Type: as!redeem activity in a Network-chat channel.
💰 Type: as!daily in a Network-chat channel.
💰 Selling your Anime cards in the marketplace.
💰 Redeeming Tomi codes from YouTubers & events: as!use KQRENL
💰 Having Tomi in your bank, gives you interest.

Do keep in mind that you cannot spam text channels to earn Tomi since there is a cooldown between every time you are given Tomi. You can also only earn Tomi in voice channels if you're not muted or deafened, however, this does not apply to music channels.

Inside the marketplace you can see all the Anime cards that are on sale from other users in the Anime Soul Network. You can see the most popular cards in the market and even sort them based on your own desire. There is also a search option available if you're looking for a specific card.

Remember that you can use the marketplace as way to earn Tomi as well, by being smart. Buy good cards, with good issue numbers (the lower, the more rare) and resell them at a more expensive price, if you do it right, you can double your Tomi in no time! 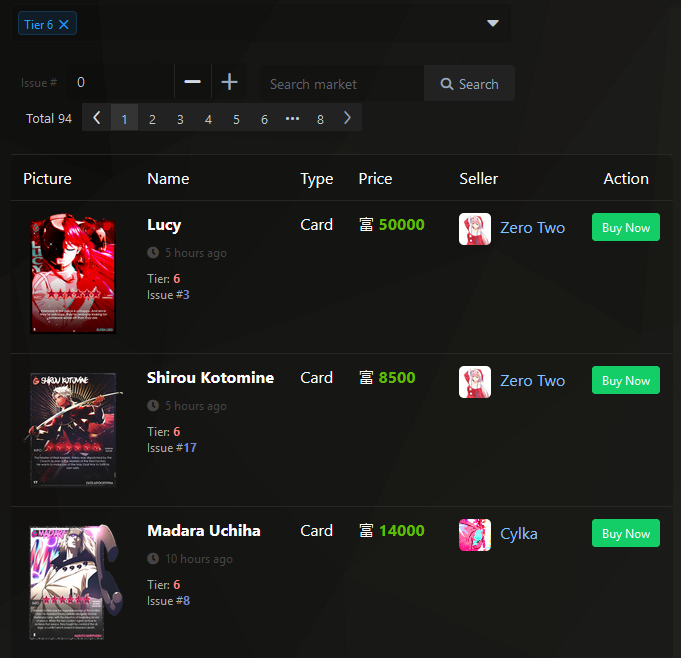 Anime Soul Network is a Network that consists of some of the best Anime communities on Discord. The goal is to unite Anime Fans across multiple communities, into one united front, for all anime enthusiast around the world. We want to be the forefront in connecting Discord users in a whole different level, giving them the best experience. A Network where you will be rewarded by simply being active, your interaction with other users means rewards! Since we started, we've already managed to connect more than 300,000 Anime Fans on Discord!

To all those who ended up reading this blog post, remember there is a hidden code here, that you can redeem in a Network chat channel, on one of the Anime Soul Network servers, the code contains 1000 Tomi, good luck finding it and thanks for reading!💚